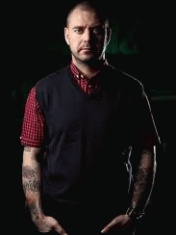 The group was formed in February 1990 and gave its first concert at the festival "Try kolery" in Minsk. From the very beginning, the student of the Institute of Culture Sergey Mikhalok became the leader. The other members of the first line-up were the current bass-guitarist of the band Dima Sviridovich, guitarist Ruslan Vladyko and drummer Lesha Lyubavin.

The Lyapis Trubetskoy collective was then only on stage, since the participants gathered together for the most part at concerts.

In 1994, "Lyapis Trubetskoy" had a chance to meet with the future director of the collective, Evgeny Kolmykov, this was the next stage in the history of the collective. This was the first person who paid the group for a solo performance at the Beer show in the "Vremya" cafe in the DK MTZ.

In the summer of 1994 "Lyapis Trubetskoy" sang at the festival "KG. Angry Holiday" held in the Sports Palace with the participation of the groups "Chaif", "Two Aircraft", "Chufella Marzufella" and others. Some time later, the musicians found themselves at the Unknown Gagarin Film Festival, where Zartipo and Khlamkin Goes to Israel performed. The success of the concert made me think about releasing a cassette. The band eventually recorded a performance at the Alternative Theater during the Rock Pass.

In 1995 an album entitled "Lyubov kapets" was released in Belarus.

The circulation of the first album was about 100 cassettes, of which only 20 were sold (the album was later reissued). The group almost broke up.

The group's career took off sharply in 1996 after performing at the Palace of Chess and Checkers. There they will be noticed by the head of Kompleksbank Evgeny Kravtsov. He offered to record the album at Mezzo Forte Studios.

In June 1996, the group released the album "Wounded Heart. The first day of sales surprised - all 200 published cassettes were sold. In the fall, a real boom began.

The sales of the second album "Wounded Heart" broke all records. According to some information (there is no exact data), the circulation was from 20 to 30 thousand copies.

The group calms down for a year. Again, the impression is that the group has broken up.

In 1998 the group released the first video for the song "Au". The clip was made in an amateur way: from hand-painted photographs of the band's musicians. Until now, this is one of the most famous videos of "Lapis".

The February album "You Thrown" brings the band incredible success in Russia and the CIS countries.

At the beginning of 2000 at the studio of the Belarusian TV the group recorded a new album called "Heavy".

The first composition was the song "Doves". The video, directed by Igor Pashkevich, was filmed in Minsk, in January at the Minsk Bicycle Factory. For two nights at temperatures close to zero, the group portrayed proletarian hooligans chasing pretty girls.

In the summer of 2001, a video clip was shot for the single "Sochi", which became very successful. On the wave of success, the album "Yunost" was released at the beginning of autumn - the group's most successful disc. Only after its release, Sergei Mikhalok admitted that after the complete failure of the album "Heavy" he was thinking about disbanding the group and starting a solo career.

In 2003, the album "Golden Eggs" was released, for the release of which two clips were shot. The first, for the song "Rainka", and the second, made in the technique of plasticine animation, was filmed by Minsk enthusiasts - the Sidoruki brothers.

In August 2004, a video for the song "Postmen" appeared, directed by American Kevin Jackson. The most expensive and unfortunate video of the group.

In 2004-2006, Lyapis Trubetskoy was actively involved in soundtracks. The team wrote the sound for the TV series "Men Don't Cry" and the movie "The Last Slaughter". As a result, in May 2006 the group released the album "Men Don't Cry. Music for Movies".

In the spring of 2007, a new disc of the group "Capital" was released, the first single from which was the song "Hare", with a video clip from the director and actor Vladimir Epifantsev, which was aired in early 2007. The main force of the disc was the song "Capital" with the apocalyptic video clip of Alexei Terekhov, which premiered on the Internet.