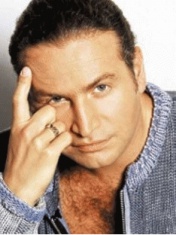 Since 1989, Leonid has traveled around the countries of the former USSR as part of famous Russian bands as a "warming up" artist, worked in Moscow studios as an author of music and arrangements for famous artists. In 1991 at the Tver studio "Salam" he recorded the song "Barefoot Boy". It was during these years that Agutin created his inimitable style, in which he uses Latin American, Spanish and North American modes.

In 1992 Agutin became a laureate of the Yalta-92 international competition, and in 1993 - a laureate of the Jurmala international competition. In 1994, the first official album appeared - "Barefoot Boy", which brought the singer national love and professional recognition. Literally a year after the release of the disc, two sold-out concerts of the artist took place at the Olimpiyskiy Sports Complex.

In 1995, Agutin won the Ovation Award in three nominations at once: Singer of the Year, Song of the Year and Album of the Year.

In early 1996, the album "Decameron" was released. Starting with this album, Leonid Agutin writes all the words and music for his songs himself.

In 1997, the Esperanto group was finally formed, with which Agutin works to this day. The high professionalism of the musicians and the performance of popular music "live" is another achievement of Leonid Agutin.

In 1997, the nascent novel of Leonid Agutin and Angelica Varum became known to the general public. The first two duet songs were included in the album "Summer Rain" (1998). On February 9, 1999, Angelica and Leonid had a daughter, Elizabeth.

1999 and 2000 Leonid Agutin devoted to his beloved women: he raised his daughter and wrote an author's album for her mother. The recording of the disc "Office Romance" was completed in the spring of 2000, and with the program of the same name, Angelica and Leonid traveled throughout the country, and also made a world tour.

In the summer of 2000, Angelica and Leonid got married and went on their honeymoon to Venice. From documentary footage of those days, the video "Half of the Heart" was compiled (the song was included in the album "Leonid Agutin" in 2001). The spring of 2001 was remembered for the bright show - joint concerts of Angelica Varum, Leonid Agutin and world music star Al Di Meola.

In 2001-2002, Leonid wrote music for the films “Silver Lily of the Valley” and “The President and His Granddaughter” by Tigran Keosayan, “$ 8 ½” by Grigory of Constantinople, “Summer Rain” by Alexander Atanesyan and for the full-length cartoon “Amphibian Man”.

2002 Leonid Agutin spent on endless tours, in parallel with which he recorded a joint English-language album with Al Di Meola in the USA.

In the fall of 2003, the album "Deja Vu" was released, and in July, on the singer's birthday, the presentation of the title song of this album was organized. The singer performed the composition "Border" together with the musicians of the group "Otpetye swindlers".

In the spring of 2004, the concert hall "Russia" hosted traditional concerts of Angelica Varum and Leonid Agutin with the program "I will always be with you."

During the first two months of 2005, Leonid in Miami completed a record with Al Di Meola. The Cosmopolitan Live album is presented in two versions - CD and DVD.

On March 7, 2005, the album "Cosmopolitan Live" was presented in Germany, where it was a resounding success. For three months, the album did not leave the top ten charts in Germany, Austria, Switzerland and Italy. This was followed by invitations to take part in the most prestigious jazz festivals in the world in Montreux, Stuttgart and Monaco as a special guest.

The album was released in 18 countries of Europe, America, South Africa and Japan.

In April 2006, Angelica and Leonid's program “You and Me” was successfully held at the Rossiya Concert Hall. On November 18, 2006 Angelica Varum and Leonid Agutin were awarded the Order of Service to Art, 1st degree. This one of the most notable awards in Russia was awarded for more than fifteen years of creative work of artists.

2007 was marked by the completion of work on two discs: Agutin's own album “Love. Road. Sadness and Joy ”and the album of Angelica Varum, where Leonid acted not only as the author of a number of songs, but also as a sound producer.

On March 5, 2009 Leonid Agutin was awarded the title "Honored Artist of the Russian Federation".