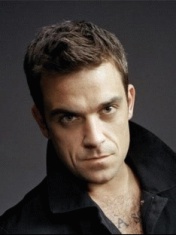 Robbie Williams is a rare example of an artist leaving a successful band to pursue an even more successful solo career. In the boy band Take That, Robbie played the unenviable role of a cute boy dancer who was allowed to the microphone on big holidays. Having trumped five years, Rob left the group with a scandal, giving out a freak show at the Glastonbury Festival. Williams had a good drink with his new friends from Oasis, and then, during their performance, he jumped onto the stage and performed shamanic dances there. Robbie was signed to EMI and hired an experienced writer and producer, Guy Chambers. The debut album "Life Thru A Lens" showed Britpop (friendship with the Galager brothers was not in vain), but Take That's audience was not ready for this turn of events. The disc would have failed, if not for the ballad Angels, the single with which became a "millionaire" (which was not least contributed to by the scandal: the press dug up an Irish singer from whom Rob allegedly bought a song after hearing him perform it in a bar).

After that, things went well for Robbie, he stormed the charts and collected awards. The single "Millennium", which was inspired by the music for "Bondiana", became his first number one in Britain, and the song "No Regrets", recorded with the participation of Neil Tennant of the Pet Shop Boys, was the beginning of a series of big duets. which continued with the song "Kids", where Rob sang along with Kylie Minogue. Before conquering the world, he lacked only one thing - success in the United States. In this sense, EMI pinned hopes on the Escapology disc and even signed an 80 million contract with the musician (only Michael Jackson knocked out more from the labels), but the idea was not crowned with success. The single "Feel", although it flashed in the charts of European countries, failed in America, and then things went even worse. Desperate, the singer quarreled with Guy Chambers and began to experiment: on the album "Rudebox", recorded with the participation of Soul Mekanik and William Orbit (William Orbit), Williams rapped and sang through a vocoder. However, you won't be full of experiments, and three years later everything returned to normal. On the album "Reality Killed The Video Star" Robbie, although nodding a couple of times in the direction of disco, clearly strove to return the favor of the housewives. However, here it is not without success. The single "Bodies" is the very pop music for which one is not ashamed. And the remix from Airplane is so good….

Robbie Williams has never been deprived of the attention of all kinds of critics and academies. Already one BRIT 2010 award (tenth in a career), awarded this time for a contribution to the development of music, speaks volumes. Robbie has received several BRIT Awards for Best British Solo Artist, twice for Best Single (Angels, She's The One), and twice more for Best Video (Millennium, She's The One). Williams has won four MTV awards, including Best Solo Artist (1998, 2001, 2005) and Best Special Effects in a Video (Rock DJ). Among the less significant awards, two stand out from the magazine "Smash Hits", which in 1998 recognized Robbie as the best solo performer, and two years earlier officially awarded the title of "funniest man in the world."

I Love My Life

03:11
I Believe in Father Christmas