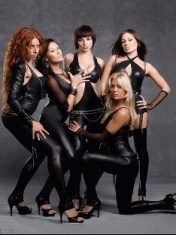 The creation of a frankly mocking group of Andrey Kuzmenko was pushed by the incredible number of girl groups on the Ukrainian stage, which differ not so much in vocal or artistic qualities as in their spectacular appearance and frank outfit.

On March 5, 2009, the group's first album, called "Pops", was released. In 2010 the group performed at the New Wave festival in Jurmala. However, the director of the competition, Alexander Revzin, did not like the name of the group. The girls were offered to change him, but they refused. Despite this, the organizers used a slightly different name. So, on the air, the presenter of the festival Ksenia Sobchak stressed the first syllable in the word "cowards". Thus, the presenter and organizers of the New Wave 2010 festival "sounded" the unacceptable name of the Ukrainian project.