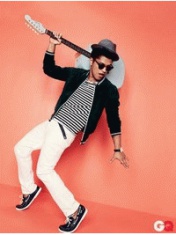 Peter Jean Hernandez was born and raised in Waikiki, Honolulu, Hawaii, of Puerto Rican and Filipino roots. At 2 years old, the boy received the nickname "Bruno" because he was a chubby child and in honor of the then famous wrestler Bruno Sammartino. Both of the boy's parents were involved in music, and he grew up under the influence of various musical influences such as reggae, rock, hip-hop and R&B. In his youth, he was fond of the work of Michael Jackson, Elvis Presley, The Isley Brothers and The Temptations.
In 1990, Mars appeared in MidWeek as "Little Elvis" and a cameo in the 1992 film Honeymoon in Las Vegas.
In 2003, Mars moved to Los Angeles to start making music. In the same year, he came up with his pseudonym. In 2006, Bruno Mars signed to Atlantic Records. At first, he was mainly involved in writing songs for other artists and producing.
Prior to becoming a successful solo artist, Bruno Mars wrote songs to Alexandra Burke, Travis McCoy, Adam Levine, Brandy, Sean Kingston, Flow Rida and the Sugababes. His first appearance as a music artist was on the album Animal by the Far East Movement [16]. Popularity came after BoB's songs "Nothin 'on You" and "Billionaire" by Travis McCoy, where Bruno Mars was both performer and co-writer. On May 11, 2010, Bruno Mars released the It's Better If You Don't Understand EP, which reached 99 on the Billboard 200. In August 2010, he co-wrote the Cee Lo Green single "*** k You!" On September 12, he performed at the 2010 MTV Video Music Awards with BoB and Hayley Williams.
Bruno Mars' debut album Doo-Wops & Hooligans was released on October 4, 2010. The first single was "Just the Way You Are", released on July 19, 2010 and topping the Billboard Hot 100. The next two singles were "Liquor Store Blues" and "Grenade". Since October 2010, Bruno Mars has acted as the opening act for the Maroon 5 tour in support of their Hands All Over album.
Doo-Wops & Hooligans debuted at # 2 on the Billboard 200 Album Chart. The album received positive reviews from music critics.
Interestingly, the star is only 1.65m tall. He also received the "Smallest Star" at the MTV Movie Awards 2009. In the spring of 2009, Bruno Mars was spotted relaxing on a yacht along with Russian model Yulia Lukashkina. Later, Mars said that between him and Julia only friendly relations.