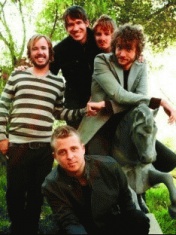 American pop rockers OneRepublic is an example of how to build a career with web 2.0. While the group struggled to build a relationship with the Columbia major without much success, their popularity on MySpace grew, and in the end OneRepublic turned out to be the most listened group among those who were not under contract. The situation was corrected by Timbaland, who signed the promising guys to his own label Mosley Music Group. Timba had never dealt with rockers before, but such a case was simply stupid to miss.

As a promotion, Timbaland remixed the band's debut single called "Apologize", not forgetting to include it on their own album, "Timbaland presents The Shock Value". The result was stunning - number one in the charts of 16 countries, 25 consecutive weeks in the American top ten (more only Santana's “Smooth”) and multi-platinum status: more than three million paid downloads alone. By the standards of a declining music industry, these numbers were incredible. In addition to this, the song set an absolute record for the number of radio plays per week (over 10 thousand).

Of course, it was not possible to repeat the success of the first single (and go and repeat this), which allowed many to record the group in the category of one hit wonders, but since then, OneRepublic has become an integral part of the world pop landscape. The debut album "Dreaming Out Loud" was followed two years later by the second one, "Waking Up", from which 4 singles have already been released, which can also be considered an indicator of success. The most percussive in the “new part” was the song “All the Right Moves”, which even before its release had established itself as a proven concert hit. "It's a completely different beast on the record and I think the studio version is even better," vocalist Ryan Tedder boasts, "This is the most energetic track we've ever recorded."

Клип OneRepublic - Something I Need