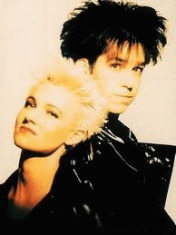 Roxette is a Swedish pop-rock band led by Per Gessle and Marie Fredriksson. Like many other Swedish musicians, they perform their songs in English.

Roxette released their debut single in the summer of 1986. After the triumph of the first single "Roxette" recorded their debut album "Pearls of Passion", which thundered all over Sweden.

Although the group wanted international success, they were in demand only in Sweden. But that did not stop them. For the next year, they give concerts all over the country, perform on television shows and give interviews.

Roxette recorded a Christmas song "It must have been love", which was released in November 1987 and burst into the Swedish charts at number 1. In 1987, a disc with remixes of the songs of the debut album "Dance Passion" was released in Sweden.

The next album "Look Sharp!" immediately became a sensation in Sweden at the end of 1988 and gave the band wild popularity.

On April 8, 1989 it became known that the song "The look" became number 1 in the United States. Also, "The look" became a hit number 1 on the charts of 26 different countries around the world, and MTV awarded "Roxette" at the ceremony "IMA - International Music Award ”in 1989 for the video, recognized by viewers as the best.

In the fall of 1989, Roxette had a second American hit number 1 - "Listen to your heart", which won the hearts of millions of people.

"Joyride" became the fourth No. 1 hit in the United States. In addition to the United States, success was achieved in 26 other countries, and MTV in 1991 again awarded the group for the best video by the results of the audience vote.

After the recording of the album "Joyride" the band had plans to make their first world tour, which began on September 4, 1991 in Helsinki. After 45 concerts across Europe, the tour continued with 10 concerts in Australia.

The guys get what they want - they are world famous and popular. In the wake of this, they release their fifth album "Tourism".

Roxette spent most of 1998 recording Have a Nice Day in studios in Spain and Sweden. The disc was released worldwide (except the US) in the spring of 1999.

2002 saw the release of a collection of Roxette's best ballads, The Ballad Hits

At the beginning of 2003, the collection The Pop Hits.

Due to Marie's illness, all promotions in the Night of the Proms series scheduled for late fall 2002 in Belgium and the Netherlands were canceled.

Per and Marie continued to release solo albums, which, to a greater or lesser extent, are becoming popular and in demand in Sweden and the rest of Scandinavia, but they do not travel outside the country on tour.

In September 2010, as part of the European tour, Roxette performed in Moscow and St. Petersburg. On November 3, Per Gessle announced the group's world tour, the first concerts of which were held in Kazan, Samara, Yekaterinburg, Novosibirsk, Kiev and Minsk. On February 11 of the same year, the new album of the group "Charm School" went on sale.

"Traveling" is the ninth studio album by Swedish pop-rock band Roxette, released on March 26, 2012. This album is a sequel to the 1992 Roxette album Tourism and even repeats its full name: Traveling - Songs from Studios, Stages, Hotelrooms & Other Strange Places.