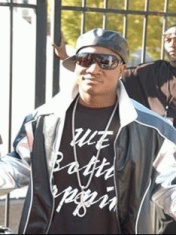 Like many contemporary musicians, the young Jaziel's career began with a commercial offer - his father, the head of a hair care products distributor, ordered his son an advertising jingle for the Revlon brand. Soon after, the son opened his own label Mastermind and began to release his music on it.

In the summer of 2006, Yung Joc (Jaziel chose this pseudonym) together with producer Russel "Blocc" Spencer recorded and released the club track "It's Going Down", and then Sean Combs, better known as P Diddy, who in the same year released "New Joc City" the first Yung Joc album on his Bad Boy Records. The new performer immediately "took off" quite high - Forbes magazine included him in the list of the richest rappers of 2006, since this year alone Yung Joc earned more than $ 10 million.

The next album, "Hustlenomics" (2007), was also released on Bad Boy Records, but after that Yung Joc and P. Diddy parted ways. According to the artist himself, he was tired of being treated like a "middle man", so he made every effort to ensure that his next record, Grind Flu, was released on his own label Swagg Team Entertainment, a division of the large company Jive Records. In addition to his own music, Yung Joc releases recordings of aspiring American rappers on his label.