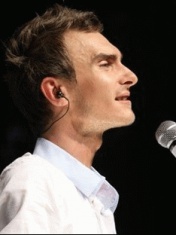 The record company Universal Music Russia is trying to make Roma Kenga both a club artist and a pop star. So far this has been achieved with varying success, but the chronicle of attempts deserves at least attention.

Roma began his musical career as a student of the pop and jazz department of the Gnesins Russian Academy of Music. He worked as an arranger in the production center of Maxim Fadeev, and later in the HRC of Evgeny Fridlyand. Then Roma decided that he should write and perform music himself. A few years later (in 2007), his desire coincided with the needs of Universal, which was going to launch a club-pop Russian-language project. The main condition of the label was that the face of the project should write its own repertoire. In 2007 a contract was signed.

Initially, the project was positioned as somewhat aesthetic. There were practically no hits in the debut album “Where there is love”, but each sound testified to Roma Kenga's good taste and readiness to instill this taste in fellow citizens who are eager for much more primitive music. However, after the onset of the crisis, the aesthetic image has largely lost its relevance, so more danceable rhythms have been relied on. The locomotive here was the ABBA song "Summer Night City", the cover version of which made it into club hits. In parallel, a duet with Agnia Ditkovskite “Airplanes” was launched, according to simple show PR rules accompanied by rumors about more than friendly relations between Roma and Agnia. As a result, the demand for the project greatly increased - the artist began to be recognized better, he began to go on tour to the provinces, although initially the concept of the project did not provide for sanchez.

Kengi's second album turned out to be more hit (all songs were included in Top100 portal Tophit), but the main advantage of his music is still that it does not irritate as a background. As an arranger, Roma worked on the Russian version of Alexander Rybak's hit “Fairytale”.