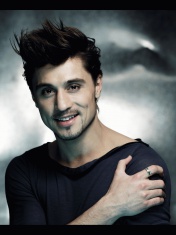 
Dima Bilan was born on December 24, 1981. His childhood was spent in Karachay-Cherkessia, and when Dima was one year old, the whole family, consisting of four people, moved to the city of Naberezhnye Chelny of the Republic of Tatarstan, to his grandmother.

It was at this time that everyone noticed the boy's extraordinary musical abilities. For the neighbors in the stairwell, he arranged real concerts. At the age of six, Dima moved with his family again, but this time to Kabardino-Balkaria, where he and his sister went to school. There he took part in all parties and matinees, read poetry, sang songs.

Then there were children's contests, festivals, concerts of regional significance and other attributes of a promising singer. Studying in the tenth grade, the artist first visited Moscow to participate in the Chunga-Changa festival dedicated to children's creativity and the 30th anniversary of the joint activity of Yuri Entin and David Tukhmanov.

While studying in his third year, at the YES! Party, Dima and his friend and classmate Sasha Savelyeva (who later won the Star Factory) get to know Yuri Aizenshpis. Later, they met at the studio, where the composition "Kid" by Ilya Zudin from the group "Dynamite" was involved. After singing this song, everyone unanimously admitted that Bilan has an extraordinary talent. The next stage was Jurmala, where Dima took 4th place.

The song and clip “Night Hooligan” recorded at that time take Bilan to a new stage of his creative career. They began to recognize Dima. The work became more and more intensive: for the final exams in Gnesinka, there were already three clips behind me: "Boom", "Night Bully" and "You, Only You". The singer came to the last exam directly from the set of his fourth video "I was wrong, I got it." In 2003 Dima graduated from the Gnessin School.

At the end of October, the presentation of the singer's debut album "I am a night hooligan" took place.