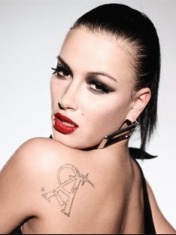 
An interesting singer, whom a certain innocence of character prevents from interacting with show business correctly. Nevertheless, the custody of the producer Konstantin Meladze allows her to hope for a long and successful career.

Anastasia Prikhodko was born on April 21, 1987 in Kiev. At the age of 15, she tried to be cast in the VIA Gra group, but unsuccessfully. However, Konstantin Meladze apparently remembered the singing girl, and the next time they met at the "Star Factory-7". Prikhodko became a beloved student of Konstantin Meladze and won this "Factory", although her relations with colleagues in imprisonment in the "Star House" were uneven: Nastya was distinguished by her wildness, delicate nervous organization and, at the same time, frankness in her statements, which a little later gave rise to almost that bullying in the press.

After "Factory" Prikhodko started recording her debut album, sang a duet with Valery Meladze, gave several funny interviews, and then, at the suggestion of the producer, got involved in the "Eurovision" race. In her native Ukraine, with the song "Mamo", she did not even make it to the final of the selection, and then Anastasia was hastily announced to the Russian national final, which she won with a scandal. The producer of Valeria, who lost a little in the selection to Prikhodko, Iosif Prigogine even wanted to sue, but he was hinted that he should not argue with Channel One.

Prikhodko was approved as a Russian participant of Eurovision-2009, and then a stream of dirt poured out on her: they remembered her “factory” statements in the spirit of “Hitler was right” and the Ukrainian language of the song “Mamo”. For a month, Nastya was preparing for the competition, working with stylists and learning not to pay attention to ill-wishers. This did not help her to take a place higher than 11th in the final, and the potentially strong song "Mamo" immediately after Eurovision lost rotation.

Having survived Eurovision with some difficulty, Prikhodko decided to take a break and devote herself to family life. She married a man named Nurik and is now expecting the birth of her first child.