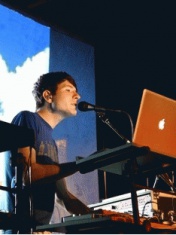 
Adam Young is the classic star of the internet age. He started making music in his basement at night during insomnia. Adam, who came up with the name Owl City for his project, diligently posted his things on MySpace, where they attracted more and more attention, and finally - a contract with Universal Republic! Album Maybe I'm Dreaming was released in 2008, and Young's energetic and romantic music immediately attracted a large number of fans, including from the indie rock environment.

In 2009, the album Ocean Eyes was released on iTunes, the first single from which was the song Fireflies - it topped the American and Canadian charts and eventually became the most downloaded song on iTunes in the United States. At the moment, Adam and his live line-up are actively giving concerts and participating in collaborations with other artists. In addition, Adam is the leader of five more (!) Projects with strange names - Port Blue, Windsor Airlift, Dolphin Park, Insect Airport and Seagull Orchestra. Each of these projects was created to record some kind of music, for example, "oceanic" music - in fact, most of the musical material is composed of synthesized sounds without vocals.

Owl City's style was influenced by the disco and synthpop of the 80s, popular in the second half of the 2000s. However, Adam also cites The Postal Service as an inspiration, the electro-pop side-project of Death Cab For Cutie vocalist Ben Gibbard - that's where the indie component of Owl City's music and lyrics seems to come from.