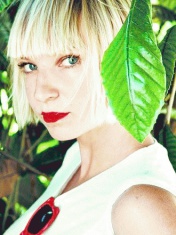 She began her musical career in a godforsaken corner of Australia. Now her songs are performed by such superstars as Christina Aguilera, Beyoncé and Adam Lembert. We often hear her creations as soundtracks for the most popular films and TV shows. She does not pursue fame, but clearly deserves it.

At the age of 17, Sia became the lead singer of the jazz-funk band The Crisp. The group released two disastrous albums, after which in 1997 the singer decided to leave the group to pursue a solo career. In the same year, the Australian debut album entitled "Only See" was released. Unfortunately, it also failed commercially (1,200 copies of the album were sold in total).

In 2000, luck finally smiles at the vocalist. Sia moves to London where she manages to get a job as a backing vocalist with Jamiroquai. Then she signed her first major contact with one of the subsidiary labels Sony Music. On July 9, 2001, Cea's second long play "Healing Is Difficult" is released. The album received positive reviews from harsh London critics, and most importantly, English clubbers liked it. The single “Taken for Granted” (10th place in the UK Single Chart) achieved unexpected success. This became popular in foggy Albion, however, in Europe and America it remained completely unknown. That all changed in 2003 with the release of her third studio album "Color the Small One". The single "Breathe Me" achieved some success in the charts, and on alternative radio stations in America it became a hit at all. Filmmakers first noticed this for the first time, making "Breathe Me" the soundtrack of the final episode in the series "The Client is Always Dead".

The next stage in the singer's life was the legendary album “Some People Have Real Problems”. Sia spent 4 years on his recording. As it turned out, not in vain. Longplay was favorably received by critics, and fans even called it Sia's best work. By tradition, Ferler herself became the author of all the songs. Samuel Dixon acted as a sound producer, who helped the singer in the work on the tracks of her previous album. The disc showed good commercial results all over the world (including in the impregnable America). The album has 4 singles and the same number of music videos.

Also, it is impossible to pass by the great cover of “I Go To Sleep” (originally performed by The Applejacks). Among the many re-enactments of this song, Cea's version stands out for its magnificent piano processing and unique vocals. It was with this song that many Russian music lovers began their acquaintance with the work of Ferler (“I go to sleep” sounded in an advertisement for a brand of elite chocolate).

In 2010 the album “We Are Born” was recorded. Needless to say, the album was highly acclaimed by critics? In Sia's case, this is not even discussed. The record turned out to be surprisingly diverse. Up-tempo tracks and ballads peacefully coexist on it. The latter on the album are unusually small, but what is there can be considered a living classic. For example, “I'm In here” is rightfully considered one of the most successful tracks.

On July 8, 2014, the world premiere of the sixth studio album Cia 1000 Forms Of Fear took place. The album topped over 20 world charts, including in the United States.

She wolf (Falling to Pieces)

Dusk Till Down
Comments