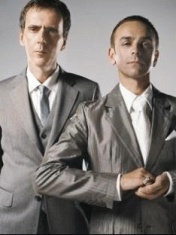 AIR began as a solo project by architecture student Nicolas Gaudin. The very first track "Modulor Mix" was not only released by Source label (a division of French Virgin), but also attracted the interest of Briton James Lavelle, the leader of the UNKLE project, who re-released the song on his Mo'Wax label. Sensing success, Gaudin involved his longtime friend Jean-Benoit Dunkel in the process, and from that moment AIR worked as a duet. AIR music has absorbed several traditions at once: the French breathed unevenly towards retro electronics like Jean Jacques Perry, pinkfloyd psychedelia and music from French cinema of the sixties. The most frequent epithet in relation to AIR was the word "stylish", around the group from the very beginning there was an aura of Parisian bourgeoisie and glamor.

AIR's first full-length disc, "Moon Safari", was released in 1998, with singles "Sexy Boy" and "Kelly Watch The Stars" roaring in clubs and on the radio. The album even received good reviews in England, which is extremely atypical for French artists. AIR even managed to get an invitation to appear on the TV show "Top Of The Pops". The next step was a collaboration with director Sofia Coppola (Sofia Coppola). Gaudin and Dunkel provided full voiceover for the film "The Virgin of Suicide" (the main theme of the soundtrack was the song "Playground Love"), and also took part in the recording of the soundtrack for the film "Lost in Translation". The integration of French electronic musicians into the pop mainstream was also manifested in the fact that AIR remixed tracks by Neneh Cherry, Depeche Mode and David Bowie, and even Jarvis Cocker from Pulp. Today, AIR has six full-length albums in its discography, while Talkie Walkie, released in 2004, has achieved the greatest chart success.