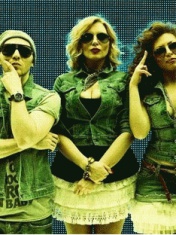 Image "Band'Eros" has always been perceived as our answer to Black Eyed Peas - the composition of the quintet formed in 2005 was very colorful, and the music gravitated towards R&B. Like their transatlantic alter egos, "banderos" went beyond this genre, albeit in a different way. They distinguished themselves with intelligible pop melodies, humorous lyrics and generally a frivolous attitude to the glamor and rhinestones characteristic of R&B. The band's music also features elements of soul, funk and hip-hop.

At first, the producer of the project kept in the shadows - then it turned out that Alexander Dulov was entirely responsible for the image and repertoire. After a couple of not very successful radio singles, "Band'Eros" shot the hits "Columbia Pictures Can't Represent" and "Naomi I Would Campbell". In 2006, the group signed a contract with Universal Music Russia, which released the album Columbia Pictures Doesn't Present. Taking into account the reissue of 2008, the disc has sold more than 200 thousand copies.

In the winter of 2007, the soloist Radu, who went to arrange her personal life, was replaced by the soloist Tanya. The debut album has remained the only one for the group so far, but Band'Eros has a very successful existence, regularly treating fans with hit singles for which colorful video clips are filmed: "Manhattan", "About a Beautiful Life", "Stripes". From time to time, the tabloid press publishes rumors about the novels of the band members, while they themselves retain an ironic view of the world: - Sleeping bags, tea bags, Chinese noodles for breakfast and a single public transport pass - this is how the concert rider of the band looks according to Batista.