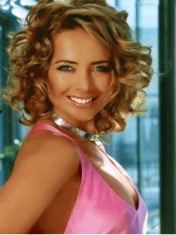 The fate of Zhanna Friske developed according to the standards of many of the stars of the 90s, but unlike most of the newly minted starlets of the past decade, she managed to stay in the “cage” and is still creatively active. Zhanna made her stage debut in 1996 as part of the "Brilliant" group. The tall, attractive brunette perfectly complemented the main vocalist and songwriter Olga Orlova, and was quickly remembered by the public. When Olga left the team in 2000, the reins of government and the status of "the main brilliant" automatically passed to Zhanna.

Now songs for the group are written by third-party authors, but new hits of the "Brilliant" sound from every iron - the albums "For Four Seas" and "Orange Paradise" recorded with Zhanna's participation take leading positions in Russian charts, and Zhanna herself is strengthening her fame filming a movie. The films "Night Watch" and "Day Watch", where Zhanna played the charming witch Alice, consolidated her fame as the main sex symbol of the Russian pop scene of the early 2000s, and at the beginning of 2009 the comedy "What Men Talk About" which Jeanne successfully debuted in the role of the main romantic dream of all men in the country.

Zhanna begins her solo career in 2003, but she decides to focus not only on music, but also on side projects: she starred in the TV show "The Last Hero", participates in photo shoots for men's magazines, and, of course, continues to record a little solo songs. The singer's style, in comparison with what she did in "The Brilliant", has not changed much - it's still the same simple, accessible pop with cute melodies and deliberately naive lyrics. But the songs "La-la-la" and and "Somewhere in Summer" are successfully fixed in radio rotation, and Jeanne turns into one of the main heroines of glamorous chronicles, not missing a single significant party. She actively collaborates with colleagues in the shop, recording duets with Timati and the Disco Crash group - and as a result, in 2005, the number of her own songs reaches the number required for the publication of the first solo album. Without further ado, he is simply called "Jeanne", and social life continues successfully.

The strategy of Zhanna's existence in show business does not change: she is still secularly active, periodically releases solo songs, and even duets (a joint work with the singer Tanya called "Western"), continues to act in films and participate in television shows. However, Jeanne has not yet accumulated material for the second solo album - the debut album is being reissued in 2006 and differs from the original release only by one bonus track "Mama Maria". Nevertheless, in 2009 Zhanna again actively returned to music, releasing three new songs - "Portofino", "American" and "A Na More White Sand". So one can hope that the long-awaited second album of the singer is about to appear on the shelves of music stores.