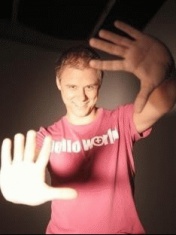 
Dutchman Armin Van Buuren, along with Tiesto and Paul Van Dyk, is considered one of the main adepts of stadium trance. It was through their efforts that trance from a club genre turned into a pop product for millions. Armin began recording his first tracks at a very young age, and his first success came at 19, when the track "Blue Fear", a nine-minute epic prog-trance instrumental, hit the UK charts. Two years later, the Dutchman joined forces with fellow countryman Tiesto and released several records under the pseudonyms Alibi and Major League. The duo's main hit was Alibi's single "Eternity". Some of the material, including this plastic, Van Buuren initially publishes on his own label Armind, but more and more major players are interested in his tracks: Paul Van Dyck's Vandit label, the British major Ministry of Sound and the dance divisions of Warner Brothers. Since 1999, the Dutchman has been annually releasing mixes under the name "State of Trance" (the first one is sold with a circulation of more than 10 thousand), and since 2001 he has also launched a radio program of the same name.

In 2003, Armin released his first solo album "76". By this time, Van Buuren regularly performs in the largest clubs "Amnesia", "Ministry of Sound", "Passion" and tours a lot. His music is also changing noticeably towards the pop format. Now Armin records shorter tracks, adapting them to the standards of radio stations and music TV channels, and vocals and a verse-chorus song structure are increasingly added to the trance arrangement. Among the guest vocalists, famous personalities appear, for example, the single "In And Out Of Love" from the album "Imagine" features the voice of the Dutch singer Sharon den Adel, vocalist of the group Within Temptation. Englishwoman Justine Suissa becomes Armin's constant companion, who also records with Chicane, Above & Beyond, Oceanlab and Robbie Rivera. Her vocals can be heard, for example, on the single "Burned With Desire". Armin Van Buuren also regularly records remixes. Among those who gave him their tracks were Killers, iiO, System F, BT, Solar Stone.

Клип Armin Van Buuren, Christian Burns - This Light Between Us