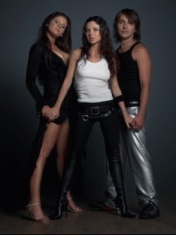 
The group "Vintage" took on the domestic pop-scene for a long time the vacant place of shocking aesthetes, who, at the same time, are not at all ashamed to listen to. The thing is that the main members of the group - Anna Pletneva and Alexei Romanov - have a very serious musical career behind them. Anna sang for a long time at the Lyceum, where she did the impossible - she eliminated Alexei Makarevich's monopoly on the creation of the group's songs and brought her own material to the girls' collective. And Alexey Romanov worked in "Amega" together with another ex-lyceum student Lena Perova. The fates of the two founders of "Vintazh" crossed in the parking lot near the Moscow Art Theater, where Anna crashed into Alexei's car. As they say, there would be no happiness, but misfortune helped.

The musicians immediately decided how to work together - Anna was responsible for the vocals, Alexey - for the music, but a third participant was needed to complement the stage picture of the group, and the dancer Mia was invited to the team, who was supposed to duplicate the lyrics in the language of plastic. And the lyrics, I must say, were appropriate: from a perky girl from the Lyceum, Anna turned into a real bad girl of Russian pop music: attractive, sexy and a little vicious.

The first album of "Vintazh" called "Criminal Love" entailed a tour of Russia, but the group wanted to shock the audience even more. The musicians recorded the song "Bad Girl" together with the actress Elena Korikova, known for the television series "Poor Nastya" - and the video clip for this song finally approved "Vintage" in the title of the sexiest national collective.

The composition of the group is changing: instead of the dancer Mia, Svetlana Ivanova is now responsible for the stage characters, and Pletneva and Romanov continue to shock the audience, encroaching on the throne of pop provocateurs, which was empty after the collapse of "TaTu". The song "Eva", dedicated to Eva Polna, the vocalist of "Guests from the Future" (it was in hurrying to their concert that Anna drove into Alexei's car), created for Anna the image of not just an erotic beauty, but a girl who is not afraid of the most sophisticated experiments. Well, the album "Sex", released in 2009, finally secured the title of the most provocative domestic pop group for the group "Vintage". I must say that the quality of recording songs is at an unexpectedly high level for the domestic show business: "Vintage" issues Europop at a high quality European level.

Against the background of the incipient provocations, the fact of Anna's birth of a third child even somehow fell out of the attention of the press, although the visual series did not suffer in any way: the singer's excellent physical form arouses the envy of both fans and opponents of the group. The group tours a lot and actively, so that the cars crashed at the Moscow Art Theater have definitely become a part of history.