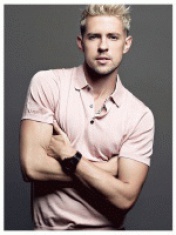 Markus Riva is a well-known singer in Latvia, Russia and the CIS countries, author and producer of songs, DJ and presenter.
At the end of 2 0 1 4 years he successfully reached the superfinal of the television show "I Want to Meladze", having beaten more than 10,000 applicants, won the sympathy of pop stars and won the hearts of millions of girls in all CIS countries. During the show, the mentors of the Latvian artist were Anna Sedakova and Polina Gagarina , and after the project, Markus began to collaborate with one of the most popular directors and producers - Alan Badoev.
Last year, the singer became a super-finalist of the Eurovision national selection round in Latvia, having received special praise from maestro Raimonds Pauls, released his fourth studio album “MR”, singles in Russian and English, and clips “Tatu” and “Strongly beautiful” were included in rotation of many TV channels.
At the end of the year, in the State Kremlin Palace, Markus was awarded the Promotion of the Year award at the Russian Music Box 2015, and in Latvia, for the third year in a row, he received the National Award in the field of style and fashion as "The most stylish performer of the year". Moment is one of the country's most popular and stylish artists.
For the last few years, Markus has been performing as a singer and DJ in the most respectable clubs in Russia, the USA and Europe.
Having appreciated the phenomenon of Marcus Reeve as a singer, DJ and presenter, his attractiveness, talent and impeccable taste, many global brands (H&M, Armani, Playboy, Fashion TV and many others) invite him to perform at their presentations and events. And in April 2016, the management of American pop diva Mariah Carey invited Markus to open her Sweet Sweet Fantasy Tour show in Riga.
At the moment, the artist is actively working on creating a Russian-language album, releasing new songs and videos, and the army of fans has grown to a million audience and continues to grow every day.
Fans consider Marcus a special artist, appreciating his ability to sincerely radiate positive energy and charge everyone with his confident optimism!