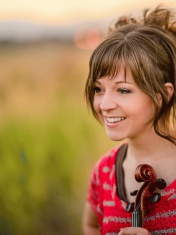 Lindsey Stirling was born in Santa Ana, Orange County, California and raised in Gilbert, Arizona, where she graduated from Mesquite High School, before moving to Provo, Utah and studying at Brigham Young University. While teaching in New York, she did missionary work for The Church of Jesus Christ of Latter-day Saints. In 2009 she returned to Provo to continue her studies, where she lived until 2012, after which she moved with her family back to Arizona. Currently resides in Los Angeles, California. At the age of 5, impressed by her father's classical music recordings, she asked to learn to play the violin. Despite the unstable financial situation of the family at that time, Stirling began her studies at the age of 6. Lindsey has trained through private and orchestral lessons for 12 years. When she was 16, she formed a rock band with four friends called "Stomp on Melvin". As part of her experience with the band, Stirling wrote a rock solo violin song that helped her win the 2005 Miss Arizona Junior and National Jr. Miss Pageant. Stirling was also a member of the Charley Jenkins group for about a year.