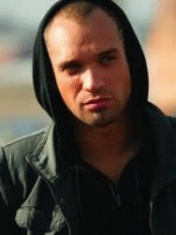 Legalize - Andrey Menshikov - was born on 06/30/1977 in Moscow. Studied at the Russian University of Chemistry and Technology. After studying there for 4 years, I was convinced that it was very far from music, and not for him. He started out like everyone else: one day he heard rap, which immediately captured him, his favorite group was always Run DMC

Legalize is the original name of his first group. The guys never signed up, the group fell apart. Only one Andrei remained from it, and this name - Legalize passed to him. The first acting group was Slingshot, organized with a man like Ladjak. This group was part of the DOB Community alliance. DOB stands for Department Of Bustas - "Department of Hooligans". There used to be a group called DOB, which included Ladjak and Sir-J, then Legalize and Ladjak merged into the Slingshot duo and the name DOB became the name of the party. Not just the name of a musical group, but the name of a party, which included several groups: Bust AS !, Slingshot, Slaves of the Lamp, Just Da Enemy. They recorded English-language rap, because they wanted to be original, and that was the trick - Slingshot were the only band that professionally (decently) read in English. They were convinced underground, i.e. we went for this consciously and never set ourselves the goal of becoming a popular group. They did what only experts recognized. It can be described as follows: rap is for rappers only. But then the League realized that he wanted something more, he wanted a larger audience. Still, with the English language, the audience is very limited, not many can understand. He decided that he had something to say in Russian, there was something to convey to the ears of the listener, and he just wanted to be understood.