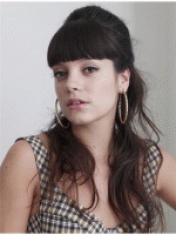 Singer Lily Rose Allen was born on May 2, 1985 in London, in the family of the famous Welsh comedian Keith Allen and his wife and producer Alison Owen.

Lily moved a lot - for some time she lived in London, then with her mother in Ireland. During her studies, she changed as many as 13 schools - Lily was never a diligent student, and she was simply expelled from many of these schools.
It should be noted that, despite the established image of a "street" girl, Lily managed to study at some of the most prestigious schools in England - for example, at the private school Hill House or at the Bedales school, which is one of the five most expensive private schools in Britain.

Later, in an interview on the radio, Lily will say: "Many people benefit from education, but the opposite was true for me." Due to the constant change of place of study, young Lily did not have the opportunity to make permanent friends, and therefore she mainly entertained herself with books and a wide variety of music - she listened to everything from T.Rex and The Slits to Happy Mondays and drum n -bass. When she was 14, she even ran away from home to attend the Glastonberry Festival.

Lily began to take her first steps in music at the age of 16, when on vacation in Ibiza she met George Lamb, the former manager of the Audio Bullys group and a person entering the music industry. It was Lam who introduced Lily to a producer named Future Cut, with whom Lily recorded her first songs.

Already in 2002, Lily, who had not yet released a single song, signed a contract with Warner Records - but later she admitted that this contract with her was signed solely due to the influence of her father. The contract was soon canceled and Lily continued to work on her own.

As Long As I Got You