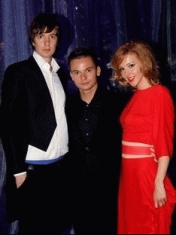 The group was formed in 2003 by the merger of two musical projects: NB and AzonE. At first, the group had 5 members. From this came the name of the group. Members of the group V-kes (Vikes), CoolB (Cool B) and Tony (Tony) met on the Internet and decided to form a musical group. Later they were joined by vocalist Olya (Loya) (in the group until 2011).

The first single of 5ivesta Family was the composition "Night City". In July 2009 5ivesta Family together with the group “23:45” released the single “I will be” on the air. The song becomes one of the most popular on radio, it lasted 10 weeks at the top of the Russian radio chart.

The group's third single, "Why?", Also becomes a number one hit in Russia.

The group rehearsed and played concerts in the most famous clubs in Moscow and toured Russian cities. At the end of 2007, the band signed a contract with the record label MusicPeople. Currently, the team is recording their debut album, performing in clubs across the country and at the same time taking part in activities of radio stations and TV channels, and also acted as an opening act for the famous rapper Ja Rule. In March 2011, Yulianna Karaulova, a graduate of the Star Factory-5, became the new soloist of the group. From that moment on, the spelling of the group's name changed to "5sta family".