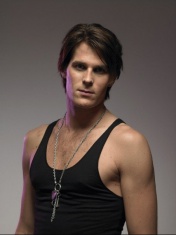 The famous Swedish producer and DJ Basshunter was born on December 22, 1984. At the age of 15, he decided to connect his life with music, creating the first tracks and distributing them on the Internet. "The Old Shit" is his first album to be leaked online. In April 2006, he signed his first contract with Warner Music.

The clip "Boten Anna" brought him wide popularity. It was the first song in Swedish to reach the top charts in many countries.

By this time, he is already an extremely popular and fashionable musician. The famous Iranian-Norwegian model Aylar Lie was invited to shoot the clips "All I Ever Wanted", "Now You're Gone", "Angel in the Night", "I Miss You", "Every Morning", "I Promised Myself" ...

At the moment, the last album in his discography is a record called "Bass Generation".

In 2012, he goes on a small tour, giving concerts in various countries.