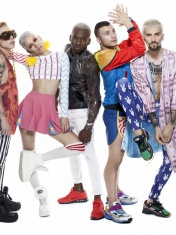 Quest Pistols is a pop group formed from the dance ballet "Quest". Their first performance took place on April 1, 2007, after which the guys went on a tour of the cities of Ukraine.

Lyrics are written by Isolde Chetkha, with the exception of the song "White Dragonfly of Love", the author of which is the young musician Nikolai Voronov.

The soloists are three members of the ballet "Quest": Anton Savlepov, Konstantin Borovsky and Nikita Goryuk.

The Quest Pistols celebrate the ideology of the present. This is not anti-glamor, this is a call to be yourself. “We want to teach people not to judge others only by their appearance. For example, at a concert we throw toilet paper into the audience, and everyone likes it. The audience begins to do the same. Especially in nightclubs, it works great, ”they boast.