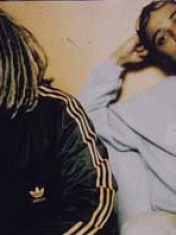 The band was formed in early 1998 by BOW (Raymond Ebenks) and DJ Gismo (Ismo Lappalainen). The debut single "Uprocking Beats" was featured frequently on radio charts, and the band managed to secure a contract with Sony Music to release the album In Stereo.
The song "Freestyler" from this album in 2000 won the first positions in almost all dance radio charts and MTV charts, where the video was shown. The group won the MTV award for Best Scandinavian Artist that same year.
The second album, Burnin 'Sneakers, was released in 2002, accompanied by the singles "Live Your Life" featuring Max'C and "Something Goin' On" with singer Jessica Folker. The album was not as successful outside Finland as the previous one.
Bomfunk went to Universal Music, which released the album Reverse Psychology. For the singles "No Way in Hell" and "Hypnotic" with singer Elena Madi, video clips were shot, broadcast on MTV.
At this time, nothing is known about the group as a whole, it is only known that DJ Infekto and Vile Makinen work separately as DJs under the name "Bomfunk DJ's", and BOW managed to work on a new album with the group Mighty 44 and released a single with the group "Uptown Rockers" called "Everybody Dance".
JS16 (the band's music producer) is currently working on Kendi as a DJ, so the band's return is unlikely.
At the moment, Raymond Ebanks (BOW) has left the country indefinitely, while the rest of the band members remained in Finland and are now busy on their own projects.