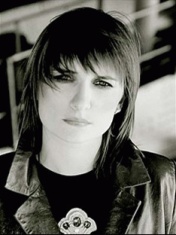 Against the background of the creative instability of the singer Zemfira, Diana Arbenina gradually emerged as the leader of the so-called Russian female rock. And having got out, he is not going to give up positions, regularly supplying fans and sympathizers with a little nervous hits. Recently, Diana became a mother of twins and now, just as successfully, she combines creativity with maternal concerns.

The future soloist and leader of the Night Snipers group was born on July 8, 1974 in Belarus. Then she moved with her parents to Russia, where she roamed around northern cities and towns. After graduating from school, she entered the Magadan University at the philology department, but studied there for only three years. It was around this time that Diana began writing songs. She created "Night Snipers" in 1993 in St. Petersburg after meeting Svetlana Surganova. The duo spent several years in the “acoustic underground”, enjoying local, “cult” popularity. Since 1994, Diana studied in St. Petersburg with a degree in Russian as a foreign language, where she also married the leader of the Winter Animals group, Konstantin Arbenin. The marriage did not last long; Diana left him with a beautiful "literary" surname.

During the first years of the history of "Night Snipers", the group was tried to unleash a variety of promoters, but a global breakthrough happened in 2001, when the band signed a contract with Real Records. The general public gets acquainted with the hits "Rubezh", "31st Spring", etc., and old fans traditionally grumble something like "sold out" and remember how they listened to "Rubezh" many years ago. Subsequently, some semi-official early albums were reissued for them, and Diana Arbenina traditionally includes several works "from a past life" in concert sets.

Since that time, "Night Snipers" confidently exist in the realities of Russian show business. Diana Arbenina compellingly explains in an interview the principles of "sniperism" ("mighty, flammable and daring"). In 2002, Svetlana Surganova left the group (which was also accompanied by excitement in fan circles), and Diana remained the undisputed leader of the Snipers. The further history of the group, which soon finally moved to Moscow, can be reduced to a listing of successful and very successful albums: several singles from each will certainly become hits.

In 2007-2008. Diana Arbenina took part in the First Channel show "Two Stars". She has published books "Sleep Deserter", "Sniper Lullaby" and others. Since 2009, "Night Snipers" have been publishing their own magazine "Gavroche". On September 9, 2009 the album "Army2009" was released. On February 4, 2010, Diana Arbenina gave birth to a son, Artyom, and a daughter, Martha.