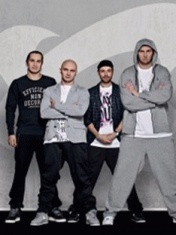 “Caste” has something to answer the anecdotal question “what did you do for hip-hop in your years”. The current heyday of domestic rap happened also because in the early 2000s this Rostov group offered its own vision of the genre - honest texts with social connotations, interesting musical backgrounds, tough emotions. The history of the "Casta" group and the "United Casta" movement has already acquired its own mythology, which is difficult for the uninitiated to understand.

The team was formed in 1995 and bore the initially difficult name "Psycholyric". Since 1997, several Rostov rap teams ("Grani", "Sand People", etc.) have united in the "Kasta" movement. By the same name, they began to call the ex- "Psycholytic". To avoid confusion, "Casta" became the name of the group, and the rap conglomerate received the name "United Casta".

The first album "Three-dimensional rhymes" received local distribution, but the disc of 2002 "Louder than water, higher than grass" thundered all over the country. Thanks to him, many have discovered Russian rap. Instead of "toy", entertaining or purely imitative hip-hop, "Casta" came out with a very relevant statement. This wave was picked up not only by the United Caste bands, but also by other bands (mainly produced by the Respect Production label).

Full of hopelessness, reading and black-eyed texts quickly entered the trend and became for some time the main direction of domestic hip-hop. Naturally, the listener was quickly overfed with these techniques, and "South Russian" rap went out of fashion. It affected the fate of "Kasta" only in the sense that she failed to become the leader of commercial hip-hop. The group is still distinguished by a thoughtful approach to lyrics and music, releases albums, and a number of them are considered solo projects of the band members (although they are recorded in full).

In 2007, "Kasta" gave a concert accompanied by the Rostov Conservatory Ensemble - a curious symbiosis of rap and academic music turned out.

The next album "Caste" (more precisely, Snake and Hamil) will be released in spring 2010. Another "solo album" caused a wave of rumors about the breakup of the group. "Casta" has come out with a refutation.