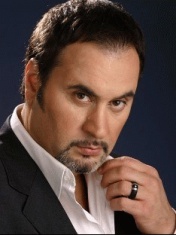 Valery Shotaevich Meladze was born on June 23, 1965 in Batumi. His childhood was quite eventful, mainly due to numerous "exploits", from which the parents of the baby often had headaches. At school, Valera studied terribly - he loved to wander around construction sites, basements, swamps with friends. Under his leadership, the kids would certainly strive to get to places where entry is prohibited.

In addition to the regular school, he attended a music school, piano, which was a real torment for him. However, at home, together with his brother, who studied violin and piano at the same school, Valera loved to play four hands and outplayed all of Paul Mauriat. Also in childhood he was fond of swimming, went to an aviation club and dreamed of becoming an astronaut. At the same time he won the title of the champion of Batumi in Georgian wrestling.

After school, I got a job - repairing phones, but soon realized that his calling was in something else. He typed textbooks and after work began to independently eliminate the gaps in his own education. By the summer he had become so proficient in his studies that he easily passed the exams at the Nikolaev Shipbuilding Institute, which he graduated in 1987. In fact, music could well become a hobby of the engineer Meladze, because Valera was going to connect his life with radio engineering and enter a completely different university. In the spring, Meladze received a summons to the army, and he waved his hand at the institute. The call ended on June 24, and on the 23rd Valery turned 18 years old. He had a grand birthday at home with wires to the army. The next morning at the military registration and enlistment office it turned out that their plan for conscription was overfulfilled, and Meladze, as in a fairy tale, was sent home with a sore head. He was late to pass the exams at the university in Batumi, but he managed to enter the institutes of other cities. Konstantin (Valery's older brother and the author of his songs) had already studied in Nikolaev, and Valera went to enter “to him”. So Meladze left for Ukraine, where he lived for 11 years.

Valery and Konstantin began their musical careers in the amateur performances of the Nikolaev Shipbuilding Institute. It so happened that these brothers, not too similar in character, went side by side in life. Once Konstantin Meladze and a classmate dropped in to a rehearsal of a local ensemble called "April". During the conversation, it turned out that the team was looking for a keyboard player, whose place was taken by a graduate of the music school in the city of Batumi. Six months later, the team "April" as a sound engineer and backing vocalist was already listed as a younger brother Valery.

Fridland helps young Meladze, whose music was liked by specialists, but was considered extremely non-commercial. The non-Russian origin of the musicians added fuel to the fire. However, the magnificent, inimitable voice, dramatic manner of performance and beautiful melodic songs contributed to the success of Valery Meladze.

Throughout the year, painstaking work was carried out on the recording of the first album with the participation of the Mysticana group and specially invited musicians and sound engineers. Valery Meladze's first hit was the song “Don't disturb my soul, violin”, thanks to which in 1994 the singer was named “Discovery of the Year”. At the same time, at the end of 94, Alla Pugacheva invites Valery Meladze to take part in Christmas meetings. Thus, the diva and her entourage fully recognized the star status of the young artist.

In 1995, Valery's debut solo album "Sera" was released at the Soyuz studio, which immediately became a bestseller. In support of the disc, four video clips were filmed for the songs “Don't disturb my soul, violin”, “Sir”, “In the middle of summer” and “The night before Christmas”. The last clip, filmed in Prague, was shown about 100 times on the leading Russian TV channels on New Year's days.

The album enjoys immense popularity, and the title track wins almost all the charts. According to the results of 1995, Valery Meladze was selected as the "Best Vocalist", and immediately received two Russian music awards - "Star" and "Ovation".

The performer himself calls the style in which Meladze works "new romance". Colorful imaginative compositions with meaningful lyrics and professional, almost operatic vocals - these songs captivate with their emotional depth and closeness to every lyrical soul.

In October 1996 Valery Meladze's second album "The Last Romantic" was released. The disc was recorded at the studio of Arkady Ukupnik and released on the Soyuz label. The musical style of the songs is becoming more diverse: elements of reggae and country are interspersed with lyrical compositions. The love songs "Actress", "How Beautiful You Are Today" and the ironic "Girls from High Society" become favorites even before the release of the record.

The huge resonance from the new album allowed Valery Meladze to gather a full hall of the Olympic Stadium twice in March 97th. After these performances, which were attended by almost all domestic pop stars, Valery received absolute recognition from his colleagues. Both shows were broadcast on the central TV channels, and a few months later, thanks to the ARS company, the record "Live Olimpic Moscow" and the video of the same name appeared in the music stores. Also, the recording from the concert in the "Olympic" formed the basis of the video for the song "Actress".

In the summer of 1997, work began on new compositions. In October, the TV premiere of the video "Samba of the White Moth" takes place. Loving allegories and beautiful stories in his songs, Meladze and the video will create in the same manner. A sad detective story about a beautiful girl who is being avenged by an outcast admirer.

In January 1998, an album was born, named after this already famous song. The disc turned out to be very exquisite and romantic as always. After the release, Konstantin Meladze, at the invitation of his Ukrainian colleagues, leaves for Kiev to work as a producer on television. Now the brothers see each other much less often, and new songs appear less often. Nevertheless, the cooperation of the Meladze brothers continues.

At the end of 1999, a new album "Everything was so" was released on Iceberg music. The songs "Dream" and "Dawn", for which the director Janik Fayziev filmed bright videos, instantly gained popularity. The next disc only confirmed the stability of the Meladze brothers' musical style. Among other things, Valery Meladze takes part in Janik Fayziev's New Year projects "Old songs about the main thing." The audience especially liked the cover version of the famous "Jamaica" performed by Valery.

At the beginning of 2002, the album "Present" was released on the same label Iceberg music, including the famous tracks of Meladze and new hits "Comedian" and "Hide tears from strangers". Impressive clips were shot for these songs under the direction of Fyodor Bondarchuk, which caused a stormy reaction from critics. In support of the record, on March 1, Valery's grandiose solo performance takes place in the concert hall of the Kremlin Palace.

Another significant event in the singer's life is the first tour in the United States, which took place in mid-autumn 2002. 11 concerts were given. Valery and his musicians have crossed all of America from New York to Miami and from Boston to Los Angeles. Valery performed twice in New York. The fact is that the first performance in the Millennium Hall was so successful that the organizers asked for another unplanned concert at the very end of the tour.

A certain break in the release of Valery's albums is explained by the new hobby of Konstantin Meladze: in 2000 he became a music producer for the young Ukrainian group VIA Gra. In addition, the elder Meladze is the author of all the music tracks of the sensational television musical "Evenings on a Farm Near Dikanka". And in the fall of 2002, Konstantin Meladze is busy working on another New Year's musical film "Cinderella", in which Valery plays the role of the main character's father.

Like the previous tale, "Cinderella" was accepted by the audience "with a bang." In the spring of 2003, in view of the great popularity of Valery Meladze's songs, his first four albums ("Sera", "The Last Romantic", "Samba of the White Moth", "It Was All") were reissued and a collection of the best video clips was released. And in December of the same year his seventh album with the sensual title "Nega" was released.

A real revelation for the fans was the joint project of Valery Meladze and the wards of his brother, the girls from the VIA Gra group. As soon as the songs "Ocean and Three Rivers" and "There Is No More Attraction" appeared on the air of radio stations, they won the hearts of millions of listeners, and the colorful clips took the first places on television music charts for a long time.

In 2005, Valery Meladze again won the nominations for "Best Performer of the Year" and "Best Duet of the Year" at the 3rd annual television award MUZ-TV. In the same year, Valery Meladze celebrated the anniversary of his creative activity by giving stunning concerts on November 11 and 12 at the Kremlin Palace of Congresses.

In 2006 Valery Meladze became the winner of the MUZ-TV award in the category "Best performer of the year" for the third time in a row. In the same year, he, together with the popular Ukrainian singer Ani Lorak, recorded a duet - this is a beautiful lyrical composition called "Return my love", which immediately fell in love with the audience. Also this year Valery Meladze received the title "Honored Artist of the Russian Federation".

Now Valery Meladze is a co-owner of one of the most popular Moscow clubs and is a member of Investtorgbank directors. Having built his country house, he became infected with construction, and now, together with his partners, is building huge shopping and entertainment complexes in Moscow. Valery Meladze is one of the most famous and talented contemporary Russian performers. Has a voice of a very wide range and rare timbre.