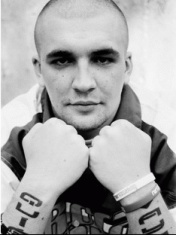 
Basta was born in 1980 in Rostov into a military family. In addition to the general education school, he studied at the music school. At the age of 15, he first tried to write rap, gathered his own group. He entered the school for the conducting department. But, after completing the first year, he left, because he realized that his sphere of interests lay far from the school program. Hip-hop became the most vital and attractive for Basta. Then it was Wu-tanc clan, Ol'dirty Bastard, Busta Rhymes and hip-hop stars of the time.

At the age of 16-17, Basta listened to a lot of different music, tried to read it himself, and at the age of 17 he recorded his first track - "City". From that moment the movement in music began. Here is what Basta himself says about his musical preferences: “I like direct music, of an honest nature. I listen to a lot of new things, friends and colleagues tell me. Here is Mityai, he has such a collection of rap, such a knowledge of the material and an approach to the selection of high-quality music, I admire. "

At the age of 18, Basta wrote the song "My Game", it became so popular that the whole south of Russia listened to it. Until now, it ranks in the top ten on the Internet charts.

From that moment, Basta began working as a musician, performing with concerts in Rostov and along the entire Black Sea coast, in the Krasnodar Territory, in the cities of the North Caucasus. Then Basta disappeared from large sites for several years. In 2002, Yuri Volos, one of his friends, invited Baste to make a studio and write music at home. It was a watershed year when everything started from scratch. Yura put audio equipment at home, and Basta restored old songs, wrote new lyrics, new melodies. But when the tracks were written, it turned out that it was not so easy to find a use for them - no one doubted Basta's talent, but few of the producers believed in him, although the concert activity resumed - the fans did not forget about him.

At that moment it became obvious that a new round was needed. But when Basta, along with Yuri Volos, came to Moscow for him, they were disappointed: they were not expected here. Later Basta will write a song about this time - "dumb labels, no chance".

However, the efforts were not in vain - one of the demo discs fell into the hands of Bogdan Titomir, who brought Basta and his companions to the Gazgolder Creative Association, where they got the opportunity to do what they loved.