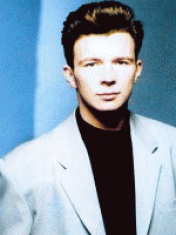 CHILDHOOD AND YOUTH
Rick Astley was born on February 6, 1966 in Newton-le-Villows. Rick's family, in which the head of the family was a farmer, had nothing to do with creativity. In 1971, Rick's parents divorced, after which the boy began to be raised by his father alone. At the age of 10, the boy began to sing in the choir. The father admired that his son from an early age showed an interest in musical creativity. Growing up, Rick decided to try himself in a school band as a drummer. But such a hobby was not serious. After graduating from school, the young man began to earn money as a driver in his father's agricultural company.
STARTING A MUSIC CAREER
Rick's musical career began with the hard rock band Give Way. But the young man was not included in it for long. Rick's irrepressible interest in the stage and fame pushed the future star in 1984 to leave the group, moving to the FBI, where he was assigned the role of the lead vocalist. 1985 was a fateful year, when the very young singer was noticed by the famous producer and composer of the 80s Pete Waterman. Noticing a special talent in the young man, Pete even provided him with the PWL studio. The first song of the singer was released in 1987, when Astley, together with Ochi Brown, created the song "Learning To Live". Almost simultaneously with this composition, the single "When You Gonna" was recorded, on the release of which the RCA company worked. Astley's expressive, unusual and strong voice amazed the management. Admiring Astley's talent, the company's management invited the singer to participate in a charity event in the same year, the funds from which were to be sent to a special fund to help victims of a ferry accident in the waters of the North Sea.
The song "Let It Be" delighted McCartney, who also took part in the action at the time.
Astley's next single "Never Gonna Give You Up" shook the audience. This disc in 1987 was the most popular in England, so its sales were record-breaking.

The annual Brits ceremony then named Rick Astley the most popular emerging artist of the year. At that time, interest in the work of the legendary singer was so great that Astley's debut album "Whenever You Need Somebody" almost immediately after its release overcame a million copies.

The tour of the British singer, which took place in 1988, continued the wave of furore. Then Rick gave his fans his concerts in 15 countries. Interestingly, in the late 1980s, the audience for Astley's compositions was somewhat limited (it was formed by teenage girls and their grandmothers who were crazy about Sinatra's songs), nevertheless, Astley's discs were sold out instantly.
It should be said that in 1988 Astley was the most broadcasted British performer, whose songs were listened to by American radio listeners every day. But Astley was upset that, despite his amazing voice, for journalists he was just a puppet in the hands of clever producers. To cut off critics from his work and stop gossip, Astley decided to further arrange his creative affairs in an independent way, leaving the production company.
BREAK IN THE MUSICAL CAREER AND A FAST RETURN TO THE STAGE
After that, there was a break in the career of the legendary singer. But the pause was very short. In 1991, Astley again recorded the successful album "Free", in which the original compositions were performed, in addition to Rick Astley, also by Mark King and the world famous Elton John from the most popular band Level 42 at that time. It is noteworthy that the single " Cry For Help ”, which was written and produced by the talented Astley himself. The success of this song was also not long in coming. The song immediately after its appearance was included in the TOP-10 songs of Great Britain. Some decline in the singer's musical career began to be observed in 1993, when the album "Body And Soul" was released. This disc did not have such a resounding fame. The exact reasons for the decline in interest in this disc are not known. But there are suggestions that the interest of fans in Astley's work has faded a little due to his distance from the traditional stage and the tightening of sound accompaniment. Seeing the decline of interest in his work, Rick Astley decided to temporarily leave the stage again to devote himself to his family.
RETURN TO STAGE
After a 5-year hiatus, Rick Astley resumed his career again. In 2001 he recorded a new album, after which he began touring around the world. 2008 was also a life-changing year for Rick, when he won the MTV Europe Music Awards for Best Performer of All Time. Rick Astley was delighted with such an award, because only a few are given such awards. In 2016, fans were able to get acquainted with the artist's new album, which was timed to coincide with the artist's 50th anniversary. The audience again happily accepted Rick's creative impulses. In August 2017, the legendary singer, during his tour, performed a rock version of Never Gonna Give You Up with Foo Fighters, which was also received with interest by the audience of radio listeners all over the world.
PERSONAL LIFE
Despite the immense fame and endless interest of fans in the work of Rick Astley and his personality, the popular British performer devoted his whole life to one woman - Lena Boseiger, whom he met in 1988. In her youth, Lena Boseiger worked as a promoter at RCA. Rick's wife later became a film producer.
Thanks to her efforts, the film "Return", which she produced, won an Oscar. In 1992, the couple legally married a wonderful daughter, Emily. The family still lives happily. For life, the couple chose a picturesque suburban area of London.

03:25
Клип Rick Astley - Whenever You Need Somebody

04:19
She Wants To Dance With Me
Она хочет танцевать со мной