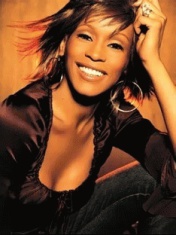 Legendary American singer Whitney Houston is best known for two achievements: song "I Will Always Love You" and hitting the Guinness Book of Records for the most awards ever received by an artist ("The Most Awarded Female Artist of All Time"). Whitney has six Grammys alone! Houston is the absolute record holder among pop musicians: the total circulation of her albums will soon approach 200 million copies, and the Rolling Stone magazine included Whitney in the list of the 100 greatest singers of the century.

This copper-skinned diva's journey to the charts began in Newark, New Jersey, where her mother, a devout Baptist parishioner, sang in the local church choir. From early childhood, Whitney was surrounded by soul music: her mother, Emily Drinkard, her cousin Dion Warvick and godmother, Aretha Franklin are the most famous soul singers. We can say that the school of young Whitney began right at home: already at the age of 11 she became a soloist in the junior church gospel choir. Meanwhile, the mother's singing career took off, and together they began to tour a lot. And when Whitney grew up, she began her own career - first as backing vocals with Chaka Khan, and then with a solo program. In 1983, Whitney performed in New York when one of the managers of Arista Records got to her concert. The company immediately offered the young star a contract and a promo: with the support of producers, Huston made her debut on The Murph Griffin Show with the song "Home". At that time, the star was barely 19 years old.

In February 1985, the singer's debut disc, "Whitney Houston," was released, the single from which "Someone For Me, You Give Good Love" was the first to enter the genre chart. A year later, the album itself topped the Billboard chart, and stayed at its top for 14 weeks. that for the debutante was simply an unrealistic record. The second album, "Whitney", was released in June 1987. Despite the nondescript title, he set a new sales record: 20 million copies.

Despite the fact that by the beginning of the 90s the singer began to be accused of "repeating herself" and falling popularity, she continued her active creative activity. Album "I'm Your Baby Tonight" showed Whitney's ability to work in a variety of styles and her penchant for artistic experimentation. While some critics have argued that Houston has “written off,” it is far from easy to maintain the highest level of world popularity.

However, Houston has managed to build on his impressive success. In 1992, she starred in The Bodyguard opposite Kevin Costner, where she played a pop star (actually herself) who hires a bodyguard to protect herself from a mad fan and falls in love with him. Although Whitney's acting in this film left, according to many critics, much to be desired, the tape became famous thanks to its soundtrack - for him Whitney Houston recorded her biggest hit, the legendary song "I Will Always Love You", which won two Grammy awards. a huge number of other awards and has sold over 15 million copies to date. Few people know that the songwriter is not Whitney herself, but the American singer Dolly Parton, who first released this single in 1974. But it was Houston's performance that brought the song worldwide fame. The success of the song and soundtrack took Houston even higher up the ladder of fame.

In the 90s, Whitney continued to act in films and release soundtrack albums. The full studio recording "My Love Is Your Love" was released only in 1998. Initially, it was supposed that it would be a "greatest hits" album with several new songs, but in the process of recording the material, there was a whole new disc. The single "It's Not Right But It's Okay" even won a Grammy award.

The 2000s became quite dramatic for the singer: her long-term marriage to Bobby Brown ended, at which time Whitney had problems with drugs. Finally, all the difficulties ended with the release of the triumphant return album "I Look To You". The disc, released after a 7-year hiatus, promises to be the most successful of her career: in the first week, more than 300,000 copies of the disc were sold - Houston's albums have never sold so quickly, and the singer has never had to complain about insufficient popularity before.

Unfortunately, the world tour that followed the release, which began at the end of 2009 with a concert in Russia, did not give the public a chance to make sure that Whitney rightfully bears her titles of legend and goddess: all viewers complained about the poor state of the singer's vocal abilities, and several concerts to the singer had to be canceled due to poor health.

Whitney Houston died on February 11, 2012 at the Beverly Hilton Hotel in Beverly Hills.

04:50
Greatest Love Of All
Великая любовь

03:54
All The Man That I Need
Единственный мужчина, который мне нужен

03:54
Saving All My Love For You
Берегу всю свою любовь для тебя

04:21
It's Not Right But It's Okay
Это неправильно, но это ничего

06:24
Didn't We Almost Have It All
Все видеоклипы Whitney Houston (29)