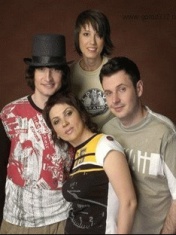 
This group, all of whose members have a professional musical education, became famous for several pleasant ballads that have found their way into almost all radio formats. The group was created in 2001 in the capital of Kyrgyzstan Bishkek: 312 is the telephone code of this city. Having reached the status of popular performers in their homeland, Aya, Dim and Leon moved to Moscow, where they met the guitarist Masha and underwent a full course of survival for the young group: they lived in rented huts in dormitory areas, played in clubs for pennies, participated in festivals, worked in session and in every possible way tried to break through. Zvuki.Ru were among the first to publish the musicians' works on their pages, and the group was met with interest by Internet users. But the charts were still far away, and the questions of survival were acute. Difficulties rallied the members of the band, although it often happens the other way around: only drummers regularly change in the "City 312" line-up.

In 2005, the disc "213 Roads" was released: although "City 312" prefers not to include it in the official discography, the album track list included most of the songs that later became the band's calling cards. Nevertheless, the team begins the countdown of its success since the signing of a contract with Real Records on December 3, 2005 (the numbers 3.12 are also encrypted on this date). The following year, the album "Out of the Access Zone" was released - all compositions known to attentive fans were re-recorded. The ballad "Stay" was featured on the soundtrack of the film "Day Watch", and "Out of Range" - on the tape "Peter FM". Both compositions became radio hits, and the Gorod 312 group became one of the stars of the First Channel.

Now the group tours a lot, participates in group concerts, but does not very often spoil listeners with new hits and albums. However, judging by the fact that the band's musicians are regularly shown among the laughing spectators of the humorous shows of Channel One, “City 312” is doing well.