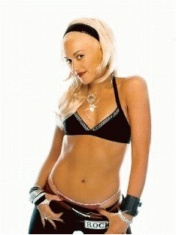 
For a long time Gwen Stefani was known exclusively as the vocalist of the No Doubt group, but in 2004, when the band members decided to take a break from each other, Gwen chose not to waste time and record a solo album. At first, it was planned to quickly record a frivolous dance disc, but the process carried the girl away, and things took a serious turn. Initially, Stephanie's main assistant was Tony Kanal, but eventually the album Love, Angel, Music, Baby grew into an ambitious project involving people like Linda Perry, Dr Dre, The Neptunes and Nellee Hooper. Stylistically, Gwen settled somewhere between R&B and 80s electropop, which suited her bright stage image perfectly (in addition to singing, Gwen also excelled as a fashion designer).

The disc's circulation exceeded seven million, and almost every single rose high in the charts, especially the song "Hollback Girl", recorded with the participation of the Neptunes, did well. Gwen has collected awards and has become a popular media persona. Released in 2008, the second album "The Sweet Escape", the singer was already recording on a knurled track. The same style (albeit with a big bias towards R&B), the same Neptunes as producers and Tony Canal with Linda Perry as co-authors, and this time Akon, Swizz Beats producer and Keane keyboardist Tim Rice-Oxley (Tim Rice-Oxley). The press accepted the disc with coolness, every now and then striving to screw in the hairpin in the spirit of "this album differs from the previous work only with a slightly more glossy model photo on the cover." However, the record sold well, and 38-year-old Stephanie did not lose either musically or visually to younger competitors.

Gwen received her only Grammy outside of No Doubt even before her solo career. The award went to her duet with rapper Eve called "Let Me Blow Ya Mind". Her solo works were nominated for this award five times, but each time they were inferior to competitors. But Gwen won the 2005 BRIT Award for Best Non-British Female Artist, one American Music Award, four Teen Choice awards and the same number of MTV Video Music Awards. Gwen received two of them for duets (already mentioned here "Let Me Blow Ya Mind" and "Southside", recorded with Moby), two more - for solo work. The video "Hollaback Girl" won the Best Choreography Award, and Gwen's debut video "What You Waiting For?", Directed by Francis Lawrence, won the Best Director Award.

02:49
Under The Christmas Lights

03:04
Never Kissed Anyone With Blue Eyes Before You