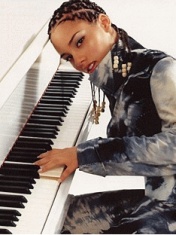 Alicia Keys started classical piano at the age of nine. The music school and the soon-to-be-started career of a performer by themselves prompted her a stage name - Keys is translated from English as "keys". Alisha began writing music at the age of 14. When she was 16, she attended the prestigious Professional Performing Arts School, completing the course in just three years. Four weeks after entering Columbia University, Alisha left him to pursue a musical career.

The very first album, Songs In A Minor, became very successful - the sales figure exceeded 12 million copies, and Alisha herself became the best-selling new R&B artist of 2001. In 2002, the album received 5 Grammy statuettes. The next album, "The Diary of Alicia Keys", collected four cherished gramophones. This record has sold over nine million copies, and the next numbered record, "As I Am" - more than eight.

During her creative career, Alisha has amassed a solid list of duets. Common rapper and Mos Def, reggae artist Damian Marley, and Maroon 5 leader Adam Levine all took to the stage with the young talent. The recording of her 2005 gig immediately topped the Billboard sales charts. Previously, only Nirvana achieved such success in this series of concerts.

In addition to her career as a musician, Alisha is actively acting in films and doing charity work. Album "The Element Of Freedom" is one of the main events of 2009 in pop music. With more than 30 million albums sold, Billboard named her the best-selling r & b artist of the decade.