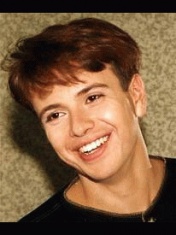 Andrei Gubin played chess, then professionally football and even “made it to the Moscow team”, but after a broken leg his sports career ended. He worked as a journalist, but after an interview with Andrei Makarevich, which he considered unsuccessful, he decided to realize himself in music. Subsequently, Gubin admitted that he was quick to draw conclusions. Then he was admitted to the Gnessin State Music School, but was expelled after the first year, due to disrespect for the rules of attendance.
In the late 1980s, Andrei Gubin was a participant in the television program "Under 16 and Older", from where his public activities began.
He wrote his first song titled "Tramp Boy" in 1986. In 1989 he released the musical disc "I am a bum" with songs with a guitar. The disc was not professional, it came out with a circulation of 200 and consisted of songs of social and political content. Then two more non-professional albums were released: "Ave Maria" and "The Prince and the Beggar".
In 1994, Andrey Gubin took part in the Slavutich-94 competition, where he met Leonid Agutin. With his support in 1995, the first studio album, "The Tramp Boy", was released. By 1996, over 500,000 original copies of the debut album had been sold.
In 1998 Andrei Gubin's second studio album "Only You" was released. With this program Andrei Gubin began performing solo in Russia, Kazakhstan, Ukraine and Belarus, in 1998-1999.
In 2000, the third studio album "It was, but it's gone" was released. The album's PR began with massive tours in the USA, Israel, Germany, Latvia, Azerbaijan, Kazakhstan and Uzbekistan.
In 2001, Gubin released the disc "The Best" and temporarily stopped touring and concerts.
In 2002 the fourth studio album "Always with you" was released.
In 2004, Gubin recorded the propaganda song "DJ Putin", released by the Shawarma Records label on the disc "Songs about Putin". At the end of the same year, he wrote the song "La-la-la" for Zhanna Friske, who recently began her solo career.
In 2007 a new song "Lena" appeared. Also AV produced the singer Yulia Beretta.
In 2009, only one song "Tenderness" was released. Since then, the singer has not released any new material.
Currently, Andrei Gubin rarely appears in public, mainly as a member of the jury at competitions. In a few interviews, he claims to have recorded several new songs, denies rumors about his alcohol abuse.