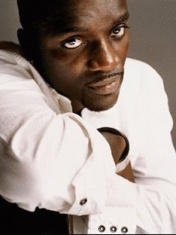 
Akon is one of the undisputed lucky ones of modern pop music: fate could more than once bring the singer to the brink of disaster, but Akon always found the only correct way out of a difficult situation. Well, or almost always.

He was born into the family of jazz musician Mor Thiam, and in early childhood he was sent to his historical homeland - Senegal, where he spent his childhood. However, the father tried to educate his son, taught him to play musical instruments and sometimes took the baby with him on tour. Therefore, when the Tiam family finally decided to move to the United States, fifteen-year-old Akon already understood what was happening in American realities.

To begin with, Akon immediately joined the gang. But the riotous life did not last long - soon the young talent received five years in prison for drug trafficking and armed robbery. Behind bars, Akon decided to change his mind, remembered everything that his father had taught him - and began to write poetry. It was the texts written in prison that formed the basis of Akon's debut album. The first disc, "Trouble", aroused public interest: truthful rap ballads about the difficult fate of a dark-skinned teenager took heart. Akon's popularity grew steadily, with such masters of the genre as Snoop Dogg, Eminem and Gven Stefani began to collaborate with him. And the second album - "Konvicted" - turned out to be even more successful than the first and reached the second place in the American charts.

And Akon is also very active in the fashion industry: his own brand Konvict Clothing produces clothes designed by Akon himself, and the unisex line predominates in clothing: T-shirts, trousers and hats are suitable for both women and men. Well, Akon demonstrated his knowledge in the world of haute couture in the video clip for the song "Beautiful".

In addition to music, Akon actively acted in films: he, for example, can be seen in the popular TV series Crime Scene. And, among other things, Akon announced recently that he is working on an autobiography film. It is not yet clear who will play Akon himself in it, it is possible that the musician will not give this role to anyone and will play himself. In the meantime, Akon has more important concerns than cinema: in 2009, he was elected musical director of the 2010 FIFA World Cup. So now Akon is very busy: he has to write not only the title theme of the championship, but also all the music accompanying the opening ceremony. These compositions will be included in the disc, which is due out in 2010 and will bear the unambiguous name "Stadium Music".

I Just Had Sex