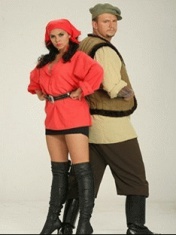 Although the style called “Russian folk R&B” was privatized by the Belarusian singer Bianca, the Ukrainian duet of Potap and Nastya Kamenskikh should be considered the most qualitative representative of this genre. Their tracks successfully combine sexuality and parody, witty recitations and catchy melodies. The image of a “beauty and a goof” can also be called an accurate hit in the target audience.

"Potap and Nastya" is just one of the projects of the producer Alexei Potapenko. Despite the rustic appearance, he is the brain center of the duo, and Nastya Kamenskikh is responsible for female vocals and beauty. In Russia, the project became known in 2007 when it won the Five Stars competition in Sochi. By the way, as one of the prizes, they were promised a performance at the opening of the Sochi 2014 Olympics. I wonder if this option still works?

The competition was a competition, but after "Five Stars" the potential of the duet was appreciated on Channel One, and since then "Potap and Nastya Kamenskikh" have been included in the list of "Channel One" artists. So, Nastya took part in one of the seasons of the show "Two Stars" (in a duet with Garik Kharlamov), Potap and his partner played in "Who Wants to Be a Millionaire", and their first Russian album was released by the Mainstream Production label close to the channel.

The project has not yet consolidated the success of the debut disc, apparently because it does not devote all its time to working on the Russian market. The 2009 album under the characteristic title "Don't Love My Brains" is practically unknown in Russia. The duo is actively working in Ukraine, and last year Nastya Kamenskikh was the confidant of presidential candidate Yulia Tymoshenko. "Not a couple" Potap and Nastya are not a love couple - they are, one might say, business partners. It is worth noting that several well-known clips of the duo have hard versions - with an abundance of naked bodies and provocative scenes.