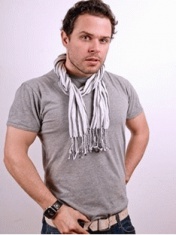 Cosmin Simionika first came into contact with the world of music when he was only five years old. It was then that his parents gave him to study the guitar. The guy was so delighted that one guitar seemed to him not enough in the end, and Cosmin rushed to explore new horizons. He even spent five years in the UK, where he studied DJing and the art of making electronic music. When Simionica considered that the experience he had gained was enough to try to become famous all over the world, he returned to Romania and began by conquering his native dance floors.

Now Tom Boxer is known in Romania as an adherent of club dance and jumping music, light and sunny house and electro. However, Simionika himself claims that he is inspired by almost any style, the main thing is that the music is kind and positive. “At the heart of what I do is pure love for God, the universe and all people,” he says. Cosmin does not limit himself to some turntables: in addition to them, he sings, plays various instruments, composes and produces music and even shoots videos. Therefore, Simionika prefers to call herself not a DJ, but an artist.

Tom Boxer has always been interested in discovering new genres for himself and for listeners. At some point, Kosmin's experiments led him to a creative tandem with Anca Parghel, a jazz singer and Latino diva. In 2008 he released a joint album with her called "Zamorena". The second single from the album - "Brazil" - was recorded with the participation of trance duo Fly Project and a couple of weeks after its release, it firmly settled on the top of the Romanian charts.

The song is made in the style of Latino house: Latin harmonies, acoustic guitars and, of course, Anka Pargel's unique vocals are mixed with a bouncy electronic beat. If you don't know that she is Romanian, you might think that Simionica has engaged some sultry Brazilian singer for the recording. Tom Boxer also spotted at the microphone - his vocal interludes give the track a distinct Jamaican flavor. Tom himself shot a video for his song. For this, the whole company had to go to Rio de Janeiro, although, of course, hardly any of them were against it. The clip is replete with sun, beaches, dances, national Brazilian clothes and carnival.