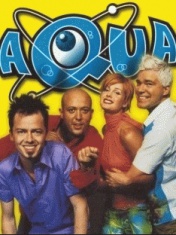 
Some bands wait for their world fame for decades spent experimenting with names, searching for an image and sound, trying to gain popularity by participating in group concerts, and so on. The same fate befell the Danish group Aqua, which originally performed under the name Joyspeed. The group was founded in 1989 by Seren Rusted and Klaus Norren; later they were joined by Rene Dif, who was working as a DJ in Dutch clubs at the time. In 1994, Lena Nystrom joined the band, after which the group changed its name to Aqua. The band's first recordings and performances were not particularly successful; somewhere in the mid-90s, the musicians began to develop their original sound, later called "bubblegum pop". In 1996, a contract was signed with the Danish division of Universal Music, and the very first single "Roses Are Red", released in September 1996, surpassed all expectations - staying in the charts for more than 2 months, the group's debut record eventually went platinum. This success was even surpassed by the next single, "My Oh My", which went gold in its first six days of release. Universal promoters by this time realized the huge commercial potential of the collective and began to promote it throughout Europe.

On March 26, 1997 Aqua released their first full-length album - "Aquarium", the sales of which were no longer aimed at Danish, but at the European and world market. In addition to the already known to the public "Roses Are Red" and "My Oh My", the album, which included 11 tracks, included the composition "Barbie Girl", released worldwide as a single in the fall of 1997. This song immediately became the "calling card" of the group - after its release, the musicians literally "woke up famous." The popularity of the song only increased due to its ambiguous lyrics, which seemed to be written about a girl (or is it a doll?) Named Barbie, but at the same time contained rather ambiguous playful hints. For this reason, the toy concern Mattel, which makes the famous doll, even took legal action against Universal, claiming that the song of the Danish ensemble tarnished the reputation of their brand. Many music critics, after the overwhelming success of the singles and album, considered Aqua to be nothing more than a "one-day band", but the group's recordings were already well-known and sold well around the world.

After the release of the album, Aqua did not stop active, releasing the singles "Doctor Jones" and "Lollipop (Candyman)", written in the same style as the already famous hits of the band. After them, the song "Turn Back Time" went into mass rotation, which was strikingly different in its "seriousness" from the previous records of the group. This song was written specifically for the soundtrack to the film Sliding Doors in the mainstream pop-rock style and reached the first positions in the UK charts.

In 2000, the band's second album, "Aquarius", was released, a song from which under the name "Cartoon Heroes" was also released as a single. Continuing to exploit their pop style, the band also tried other styles. Despite the fact that the album was enthusiastically received by the fans of the group, it did not have serious success. Perhaps that is why work on the further release of songs from the album as singles has stopped. The musicians went on tour and decided to start recording their third disc. However, in 2001, the group broke up, according to rumors, due to disagreements between the members, although the musicians themselves assured the press that they remained on good terms. In 2002, the collection "Cartoon Heroes: The Best of Aqua" was released, containing all the group's singles and a number of remixes.

After the breakup, the members of the group continued their musical activities. In 2007, Aqua announced a reunion and an upcoming 25-concert tour, which ultimately did not take place - the group played 8 concerts in their homeland, but this was already a serious reason for the joy of their fans. On June 15, 2009 a new collection of Aqua's greatest hits was released, including a new single "Back To The 80's". The group has also been active in Europe and Scandinavia. In August 2009, the band announced that they would begin recording their third album in early 2010.