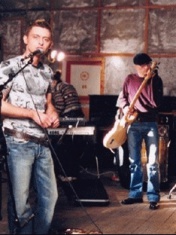 
"Beasts" is a rare project for Russian pop music, in which the production efforts were adjusted to the leader: usually it is quite the opposite. But in the case of Roma the Beast, the music resonated so precisely with the expectations of the masses that the producer had only to create favorable conditions for Roma's creativity - and the teenagers brought the “Beasts” money for albums and performances.

The group was conceived by Alexander Voitinsky and Valery Polienko, who had something to do with the creation of Tatu. At the first stage, it was planned to create something like a male analogue of this girlish duo. Project participants were recruited through advertisements on the Internet. However, when the Taganrog compatriot Polienko Roma Bilyk appeared on the production horizon in 2001, this concept was forgotten: it became clear that the group needed to be created around this provincial with a not very presentable appearance.

Bilyk, who graduated from the construction college, was called the Beast as soon as he learned the name of his group: this state of affairs seemed to him completely natural. The team enjoyed the support of CD Land, which had recently been burned by the production of the Segodnya Nite project. Therefore, the label began to cooperate with the "Beasts" with caution: the promotion of Roma and Co. began with the launch of clips for the songs "For you" and "Just such a strong love"; when the first album "Hunger" was released in 2003, it turned out that these were not the best tracks on the album. Nevertheless, they became hits - after which the remarkable commercial potential of "Beasts" became obvious to the label. Bilyk was no different from his listeners, he sang about what they were thinking, and clothed it not in a sweet-pop form, but in rhythmic rock with tenacious refrains. The audience received a new idol, and the MUZ channel - the winner of the award in the category "Best Rock Group" for six years.

To the second album, popular hits went in a jamb: "Districts-quarters", "Everything that concerns", "Stronger drinks". "Beasts" also manage to shoot clips with obvious but interesting stories with their own hands, which also contributes to popularity. The tour schedule becomes so tight that the soloist's vocal cords cannot stand it, and he pauses concerts for two months to recover. Roman Bilyk has not yet been trained in professional vocal - a distinctive feature of the band's "sound" is the soloist's heroic breaths at the end of each phrase: they are not cleared even from studio recordings.

The third album is called "When we are together, no one is cooler" (2006). Even the title shows that Roma the Beast is struggling to meet the expectations of its audience, although it is becoming more difficult to do this: Roma, born on December 7, 1977, is growing up, and his audience is still worried about puberty. In 2006, the soloist of "Beasts" publishes the first (and so far the last) part of the autobiography "Rains Pistols", where, in a tongue-tied, common-folk manner, he talks about the Taganrog period of his life (Roman dictated the book, but he forbade editing his speech so that naturalness would not be lost) ... At the same time, "Beasts" think about their responsibility to Russian culture: they are planning to open their own production center and remove their leader in the role of ... Dmitry Donskoy (both projects, fortunately, were not implemented).

In 2008, the song "Districts-Quarters" was included in the soundtrack of Valeria Guy Germanika's film "Everyone will die, but I will stay", and "Beasts" released a new album, "Further". Roma the Beast is clearly looking for a new sound and new themes of lyrics, worthy of a 30-year-old married man and a young father, but the search goes with varying success. In 2009 "Beasts" presented their songs in acoustic sound, and now they are busy preparing a new album, information about the future sound of which is rather contradictory. The group was not included in the number of nominees for Muz-TV-2010.